A new chapter in the history of Tamron 90mm macro lenses

The SP 90mm F/2.8 MACRO VC (Model F017) is the most recent release in a successful line of Tamron SP 90mm macro lenses. It redefines the best in advanced features and succeeds a legacy of superior optical performance.

XY-Shift compensation has been newly added to reinforce VC functionality, further improving image stabilization capabilities at any shooting distance from infinity to macro. Advancements in USD control software have also increased AF focusing speed and optimally fine-tuned for various framing conditions. Furthermore, a high standard of Moisture-Proof and Dust-Resistant Construction has been added to prevent intrusion of dust or water droplets. Highly durable, Fluorine Coating is applied to the top element surface and efficiently prevents condensation of moisture and repels smudge-causing substances.

Meticulous craftsmanship is demonstrated in every detail of the exterior design of the newly transformed SP 90mm macro lens. The user can feel it in the exquisitely smooth texture of the metallic barrel.

The lens features an optical construction of 14 elements in 11 groups, including one LD (Low Dispersion) and two XLD (eXtra Low Dispersion) glass elements that in consonance help to control lateral and on-axis chromatic aberrations at a very high level of performance. A Floating System works in tandem with the optical construction to efficiently compensate for inherent aberration changes subject to varying distances. Therefore, this lens ensures seamless and outstanding depictive capabilities across the entire shooting range – close or far.

Flare or ghosting can be detrimental to a decisive shot. A combination of 2 types of coating – eBAND (Extended Bandwidth & Angular-Dependency) layered on top of BBAR (Broad-Band Anti-Reflection) – dramatically improves anti-reflection efficiency to deliver flawless, crystal clear images even against harsh beams of sunlight. 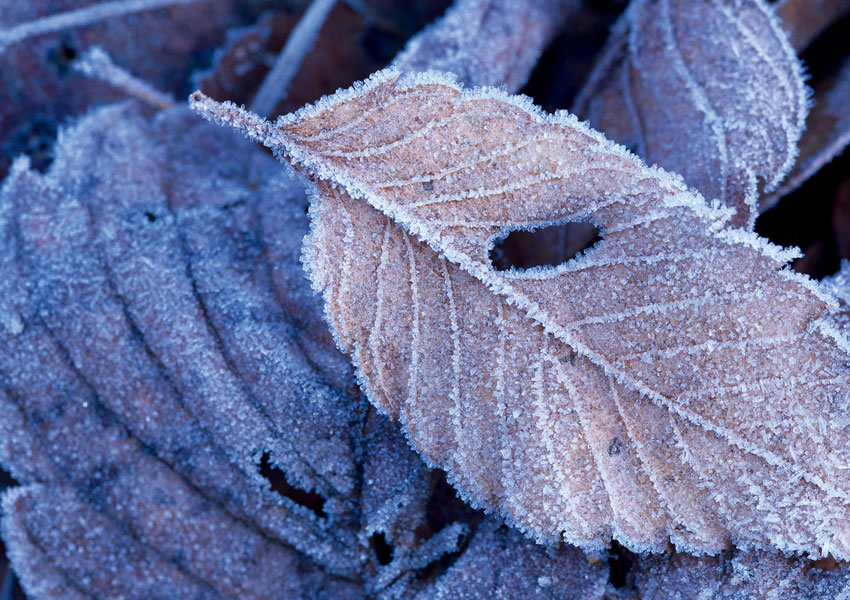 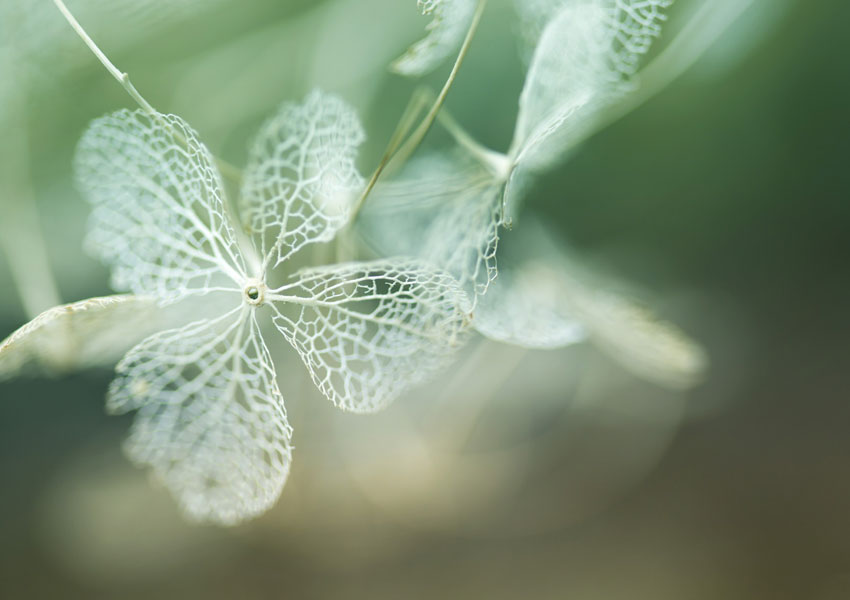 Commitment to Extending a Legacy of Bokeh with Elegance

Tamron has maintained a reputable standard for generations of 90mm macro lens models — all the way from manual focus lenses to the current AF models — for their exceptional depictive quality with spectacular bokeh. We also set a high standard to keep pace with the upward migration of digital cameras with advanced technical features and high pixel density.

We have now balanced these polar traits at a higher level: raising resolution performance to a new standard of sharp images, while rendering a soft and smooth transition in gradation of blur-effect in background objects. Optical simulations were thoroughly conducted to realize both well-tuned bokeh effects, while minimizing disturbance in dual-line smear of linear-shaped objects naturally blended into the overall bokeh effect.

The result: the SP 90mm F/2.8 MACRO VC sustains the tradition of excellence in optical design while extending the limit in cutting-edge optical performance and beautiful bokeh.

An accelerometer has been newly integrated into Tamron’s highly accredited VC to compensate for shakes on the x-y plane.

The accelerometer in unison with a gyro sensor detects and enables motion compensation for camera shakes for a maximum efficiency in image stabilization optimized for distance ranges from infinity to macro. 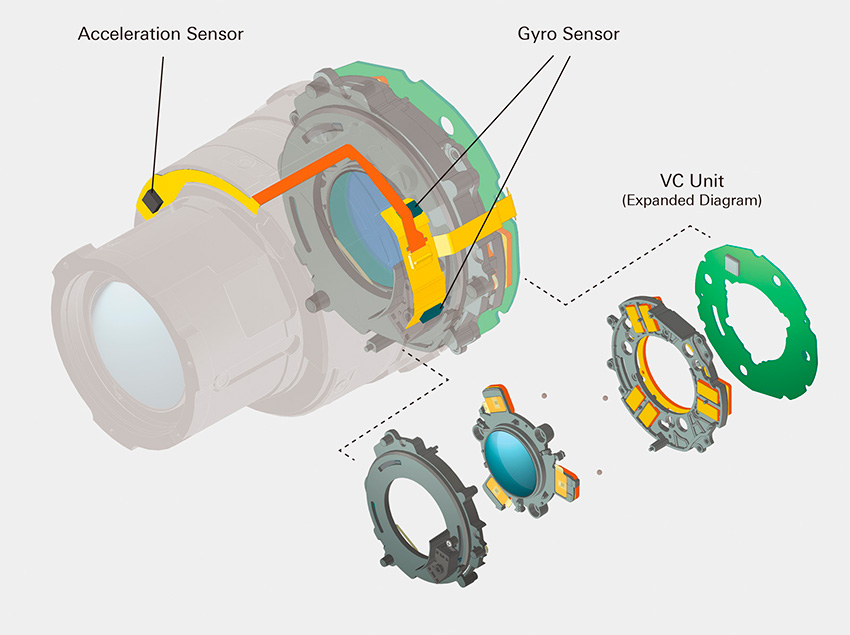 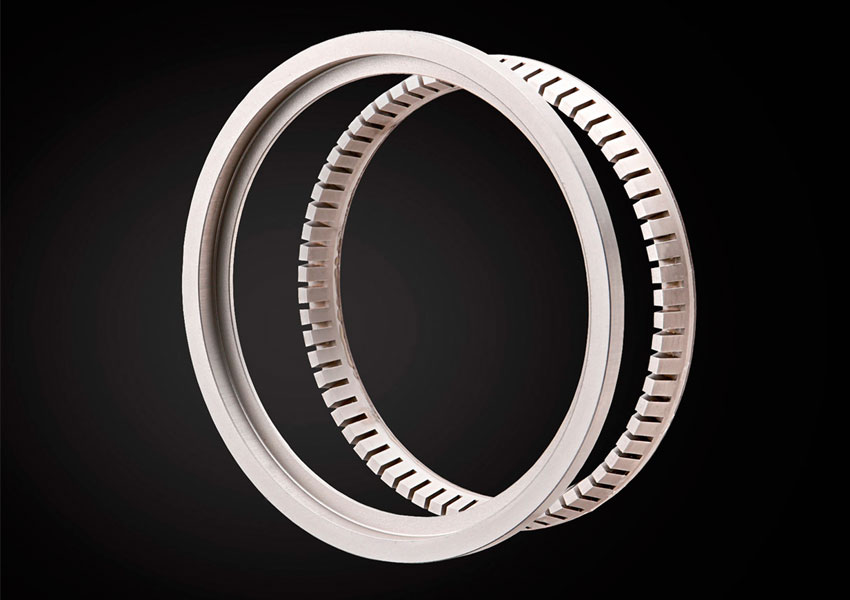 The USD (Ultrasonic Silent Drive) control software has been optimized for macro photography with increased focusing speed and positional accuracy when shooting in close-up settings. The AF drive responds rapidly yet quietly to zero in on the photographer’s point of interest and the Manual Focus Override enables instant shift in focus when necessary.

Moisture-Proof and Dust-Resistant Construction has been improved to an exceptionally high standard in lens protection, preventing any intrusion of dirt, dust, or raindrops. A rubber seal protects each switch on the lens and sealing member is applied to the mechanical interface between the focus ring and the lens housing. The new construction further expands opportunities for shooting, ensuring reliability even in harsh, windy conditions and immediately after rainfall. 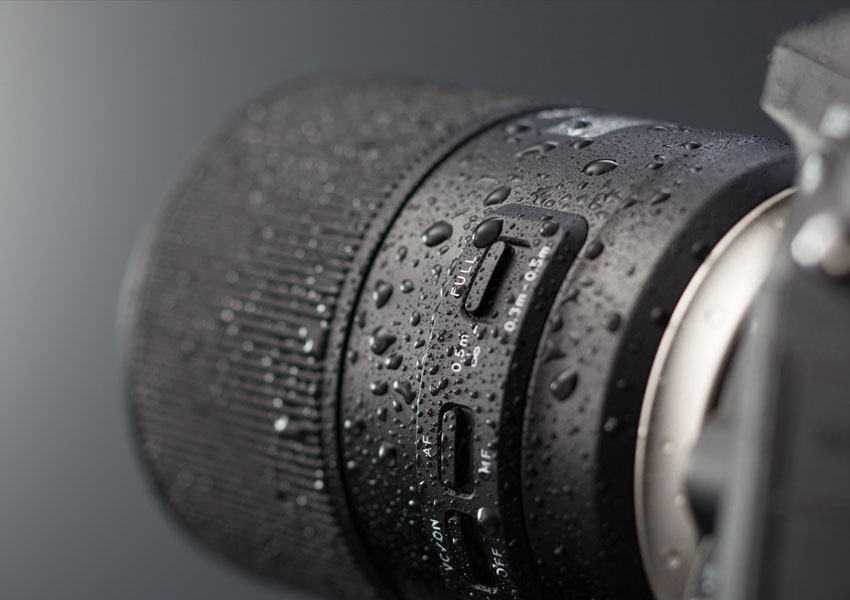 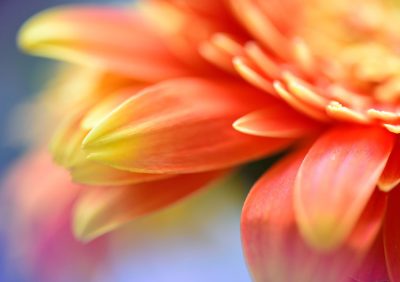 Reduction in Flare and Ghosting: Superiority of eBAND Coating 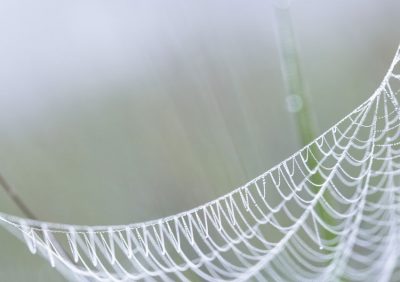 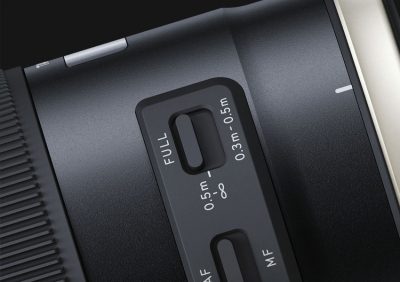 As the shooting distance to the subject is determined, the photographer can choose to manually limit the travel range of the focusing group. This reduces the amount of time that it takes to focus on the targeted subject, making it possible for swift AF operation and preventing a precious photographic moment from slipping away. 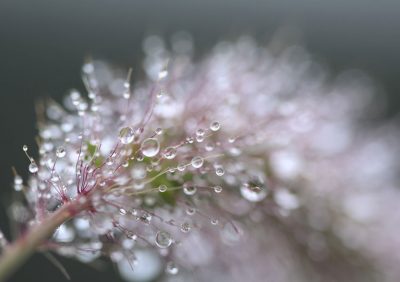 A USD (Ultrasonic Silent Drive) is used for the AF driving system in the SP 90mm F/2.8 MACRO VC. The integration of a full-time manual focus override mechanism enables a photographer shooting with AF to instantly make fine focusing adjustments with manual focus, without having to switch back and forth between AF and manual focus modes. 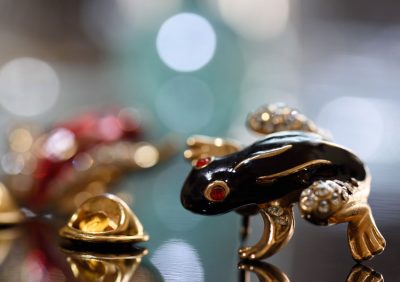 A 9-blade diaphragm is configured to retain a smooth, circular-shaped aperture opening even when stopped down by two stops from the wide-open aperture. This produces a smooth-edged bokeh in background light spots and avoids rugged aperture geometry. 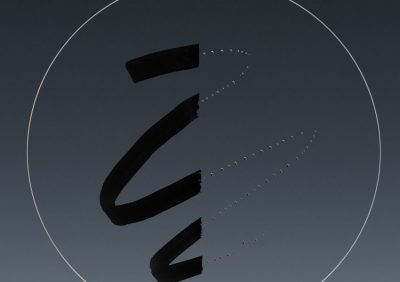 Fluorine coating, originally developed for use in industrial optics applications, has now been applied to the lens to offer long-lasting oil and water repellency. The water-and-oil-repellant coating applied to the front element surface instantly repels dirt or smudges for ease of cleaning and maintenance. The coating is also durable to accompany the photographer on outdoor travels for years to come. 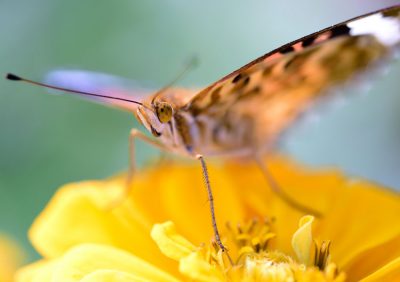 With the IF system, the working distance from the front element to the subject does not change during focusing. The distance of 139mm is maintained even during close-ups. This allows the photographer to secure distance away from live, sensitive subjects and to prevent a photographer’s shadow from intruding and disrupting a precious photographic moment.

Expand Your Options with TAP-in™ Console 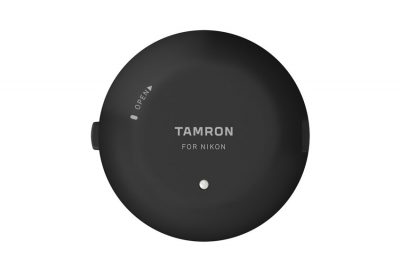 The future is here. Now you can update firmware, customize autofocus positions and adjust the mechanical setup and preferences of the 85mm lens by simply attaching it to the TAMRON TAP-in Console and connecting it via USB to a personal computer. 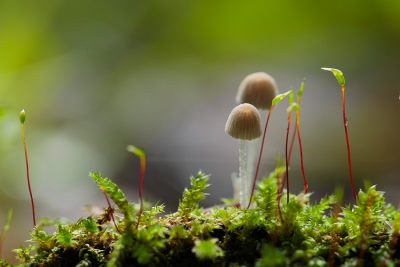 Minute objects are projected on the camera’s image sensors at a magnification ratio of 1:1 so that the photographer can enjoy a macro world on print that would otherwise be impossible to experience with the naked eye. 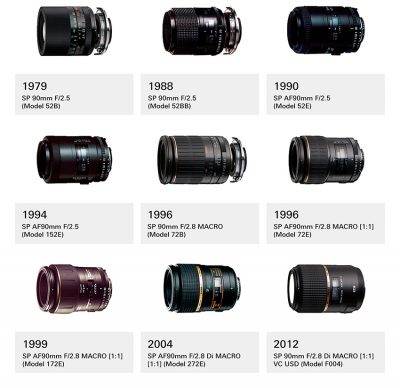 The SP 90mm F/2.5 (Model 52B) was Tamron’s first 90mm macro lens released in 1979. The general perception of appropriate use for a macro lens back then was for its close-ups, especially in the professional world, such as for documenting minute details for academic purposes and storing photographs for documentary records.

Against this historical backdrop, Tamron released its first-generation 90mm macro lens and succeeded in breaking away from convention and creating new value for the modern macro lens – by balancing highly refined, depictive quality in photographic images with remarkably beautiful bokeh.

Since then, the macro lens has become highly valued by professional and amateur photographers alike for its wide-range of use in situations that were once considered unimaginable, as it gained popularity in portrait photography. It even adopted the tagline, “the portrait macro lens”, which came to be widely propagated with time.

The arrival of the SP 90mm F/2.8 Di MACRO 1:1 VC USD (Model F017), renewed by vast improvements in performance and design, is destined to mark a new chapter in the history of Tamron’s 90mm macro lenses. 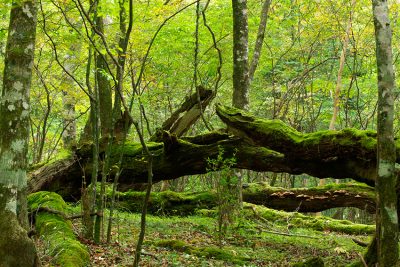 The SP 90mm F/2.8 MACRO VC is a versatile lens that allows the photographer to enjoy shooting in a wide variety of circumstances. The lens can be used particularly for macro photography as well as for portraiture by taking advantage of the fast F/2.8 aperture and remarkable bokeh capability. Photographers can take advantage of the versatility to approach subjects for tabletop photography, as well as to capture distant views for landscape photography with its outstanding resolving power.

Our attention to every engineering detail has yielded the most advanced optical and electro-mechanical design featured in the newest Tamron SP lenses, culminating in a new benchmark for high performance and visual elegance.

The design philosophy is based on human touch and is an integral factor in macro photography. The newly designed all-metallic barrel features an embedded concave ring at the base of the lens – for a firm hold and comfort necessary for a steady shot.

Switches are larger and reconfigured for smoother torque and the typeface has been redesigned for intuitive legibility. 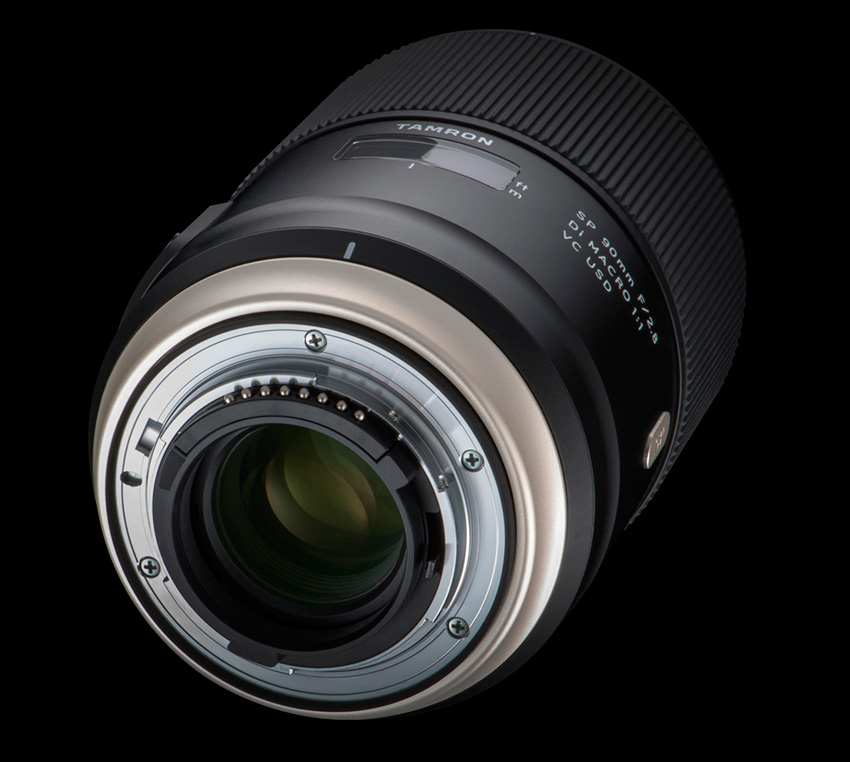 Specifications, appearance, functionality, etc. are subject to change without prior notice.

* Length is the distance from the front tip of the lens to the lens mount face.
** The circular diaphragm stays almost perfectly circular up to two stops down from maximum aperture.
*** Sony mount model without VC.

All DSLR camera functions are possible when the Model F045 is attached to a mirrorless camera via the manufacture’s adapter.
Please visit our support website for details:
https://www.tamron.jp/en/support/